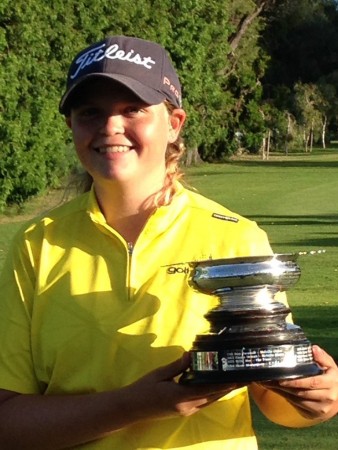 Kirsten Rudgeley won her second junior championship in a week when she took out the Golf WA State Junior Girls’ championship at Royal Perth Golf Club on Sunday. In conditions made difficult by both the wind, which blew all day, and very slick greens Kirsten found herself one shot behind 2015 winner Kathryn Norris (Mandurah) after the morning 18 holes. The afternoon saw Kirsten play some very steady golf and sink some good putts to take a three shot lead over Kathryn with 2 holes to play. She maintained the lead and won her first state title by 3 shots. Congratulations on a great effort Kirsten.

Sixteen Mount Lawley juniors played in the event in which Alice Chang finished 4th in the gross while Eve Cohen won runner-up to the nett championship. Jordan Doull was fifth in the boys’ championship. Special congratulations go to three of our very young junior girls in Valerie Khuu, Josie Neuman and Ruby Fry who played their first 36 hole rounds and played very well.

We wish Kirsten good luck this week as she  travels  to Tasmania to played the Elvie Whiteside Championship at Royal Hobart. Play well Kirsten!

← Back to previous page